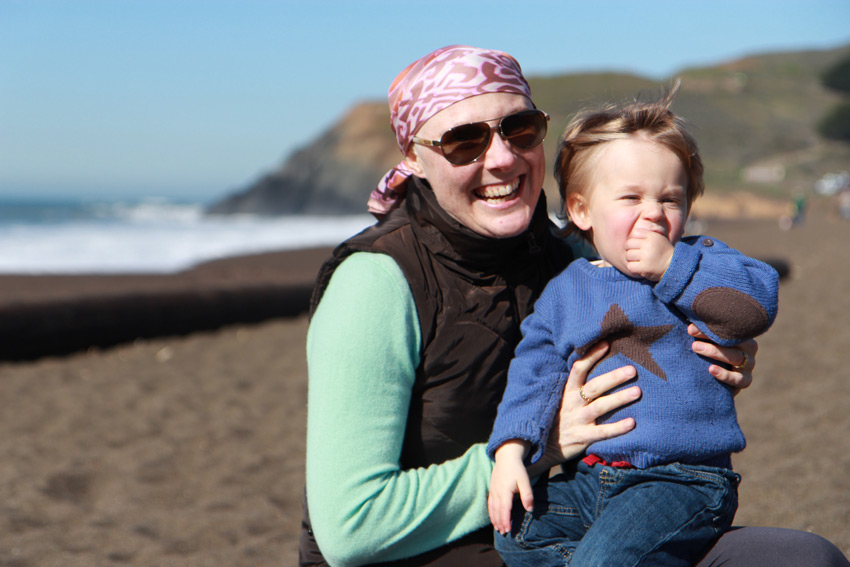 I wrote this last week before my [chemo] trip to LA to City of Hope; we leave again this Tuesday afternoon.

Thinking white blood cell count thoughts. Lesley is with me and I’m so glad; it’s so good to have new energy. It feels good to be with Lesley and have a little girl getaway even though it’s a cancer trip and not a spa or wine country getaway. (Instead it’s “Welcome to beautiful Duarte, California.”) I sometimes long for those drugged out days when I was kept out of the conversation. The reality of my illness is sinking in and is sometimes unbearable. The fear – that initial fear – is lessening but I’ve decided to start reading more. I couldn’t bear to read about inflammatory breast cancer but I’m feeling ready to tackle it now. I feel ready.

After a dark couple of weeks emotionally the sunny weather and flowering spring trees have been such a blessing. And I’m loving the little things like taking a bubble bath. I couldn’t—and didn’t want to—be in warm water for so many weeks after that first round of chemo in December and then with the arm port it was impossible. As strange as it is to have this thing in my chest I do love the port; being able to get into water without thinking about it is something I never thought I would appreciate. I can’t wait until it’s warm enough to get in a swimming pool.

I’m so tired of talking some days. It’s hard to explain to people. I just don’t want – or have the energy to talk. When I feel lonely I like to have people around but some days it’s exhausting. And the traveling is just getting more and more tiring. I’m tired in general; that is the hardest part of being sick. When I rally at night and try to do things like go out to dinner I end up sleeping most of the next day. Bedtime is usually 8pm. And I really try to get up with Roman at 6am. I love sleeping in but feel guilty when I do. I love seeing his little face and hearing “Mama” on the monitor. Penelope is not acting out as much and seems to be settling in to the new, new routine. The mom guilt is still there but lessening.

I have now gone out bald three times in public! It feels liberating. It’s been so many weeks since the big shave that I sometimes forget I don’t have any hair. Some people look away or keep their head down but others just treat me like a normal person. My hair is starting to grow back since I’ve had a chemo break; the stubble feels strange after so many weeks of a smooth dome! Nice that the grey hair is coming back, too; short grey hair is definitely not the look I’m going for…

Still searching for lessons in all this. I’m beyond the “why me” but still struggling to see what good is coming from this; the financial, physical, and psychological tolls are so high. I would love to think there is a grand plan but so far it hasn’t revealed itself. Apparently I’m not alone in this; my mom’s neighbor is a Buddhist monk (a practicing, meditating-all-day, honest-to-God monk) and when he came down with an autoimmune disease last year he struggled with it. He said he struggled so much he had to leave his family and go away for a while. That was comforting to me; that someone who devotes his life to spiritual work would find it hard to accept a disease. One would think all that meditating would help you in a time like that but apparently not so much. He is the nicest man; he’s so calm and around my age and their son is a few weeks older than Penelope.

I’m so eager to get chemo tomorrow I can hardly stand it. It feels like a perverse form of Christmas Eve; you’re anxious and excited and can’t wait for the day to just happen. Because every moment that I don’t get more chemo I get worried that the cancer has one more day to spread, one more cell up on me. And I want to stop it, drown it, dissolve it. I am practically hopping up and down I’m so excited for the blood draw and the hospital bed and the drip, drip. It will be 15 weeks on Friday since I got diagnosed. The sense of time feels like pregnancy time, when you’re measuring your life in weeks. It makes the time pass so quickly. I think, what happened in February? I’m trying to live in the moment, pay attention, but I’ve had a couple of dark weeks. The waiting period, the not-doing-anything has been so hard. I’ve learned to look forward to chemo because I know it’s doing something–that something is fighting besides my mind.

Lesley just read in a magazine about a woman whose mother (a Holocaust survivor) taught her: Fear is not an option. I’m clinging to that. I might get t-shirts made.

That’s all for now, my friends. Thanks, as always, for the support, the books, the meals, the cards—they all mean so much to me and even more now as the weeks go on.

My sister gave me The Book of Positive Quotations and I’ve been browsing through it; I particularly liked this one from Sylvia Townsend Warner:

“To think of losing is to lose already.”

With love and gratitude,